Quretech, Hiloprobe and Inficure made the 30th of March a day to remember for Umeå Biotech Incubator. Beeing at three different events, in three parts of Sweden – they all managed to take home the main prize. An unprecedented hat trick that shows how strong the startup portfolio from Umeå really is.

The 30th of March started out as any other day at the office. But ended very differently. The first good news of the day arrived around noon when one of the UBI business coaches reported back from Åre in mid-Sweden, where she and one of the resident cases were attending Åre Business Forum – a national meeting focused on growth, economy and innovation that is trying to brand itself as the equivalent of the World Economic Forum i Davos – but for Scandinavia.

“Lina is in the finals!” said the text from Helén Fält, followed by a number of happy emojis. Lina in this case referred to Lina Olsson – the CEO of Hiloprobe – a startup developing a new, detailed and accurate way to diagnose colorectal cancer. Their mission is to substitute the current clinical practice that uses a crude routine from the 50-ies that leaves some patients without treatment, resulting in cancer relapse – while others undergo unnessesary and painful treatments for no good.

First news of the day strikes a positive note

The current clinical results, or the fact that half of all patient with the diagnose die, speaks for themselves. Hiloprobe is based on Lina Olsson’s original research that she undertook for her PhD in Immunology. Now she manages the applications of that research which she hopes will make a true impact and chance colorectal cancer diagnosis for good.
– I’m totally satisfied with getting to the finals. Over 100 startups applied to Almi pitch – and the worst we could get now is three our of a hundred – that is really good no matter what, she says over the phone, when we talk a little while later.

She tries to sound restrained. But Lina Olsson’s voice is excited and she talks fast. She mentions technical issues with the microphone and recaps the precious advice given the day before – when she gave a five minute pitch to an investor panel and recieved very valiued feedback. Her two fellow finalists are also great companies, that she finds very interesting she says. Five hours later we follow the live broadcast from Åre – and watch her walk up on stage to receive the check of 100 000 SEK for the first prize. 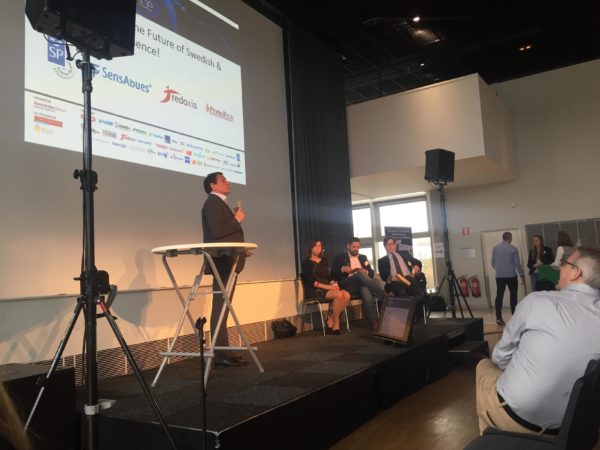 At the same time in Medicon Village in Lund

Another pair of UBI-representatives were at this time located in Lund in the Southern tip of Sweden this same day. Fritiof Pontén, CEO of Quretech Bio, was pitching to another panel of judges at the international branch networking event “The Future or Swedish and Danish Life Science”. Jennie Ekbeck , CEO of the incubator is one of the speakers on the programme, was also present.

Quretech Bio is one of our most interesting startups, with a portfolio of novel compounds that has been shown to fight bacterial virulence by stripping them of important connector features, in science jargon called “pili”. Imagine a sun with rays pointing in all directions, that is a normal bacteria, and the rays, or pili are vital to attaching and infecting cells in the human body. With Quretech Bios novel antibiotic approach the bacteria looses all the rays (or pili) and is suddenly not much of a challenge for the regular immune system cells inour body that can go to work as usual and destroy the intruders faster than they multiply. A huge advantage of this approach is that the “antibiotics” do not aggrevate resistance development, as it does not kill bacteria directly.

As Quretech Bio is one of the five companies from UBI that are actively seeking investment, this was a great opportunity to take part in. It didn’t take long after the first finale notice – until we got the news that Fritiof had gone all the way and won the pitch contest in Lund. Amazing work by our two pitching cases, but we had no idea whet more was in store.

Check out this networking event on: http://www.swedishdanishlifescience.se/ 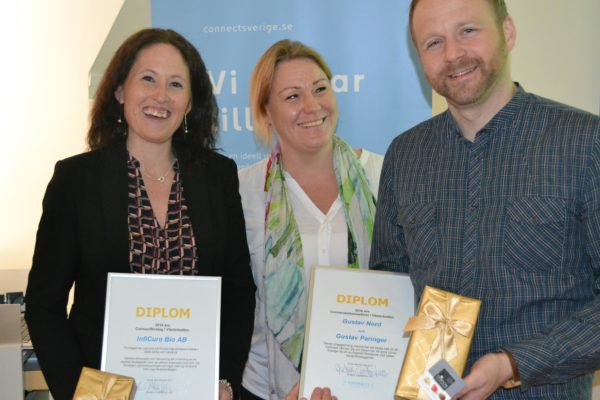 The third incubator Company out and about this day was Inficure Bio. Sofia Mayans, the CEO of the company is used to the limelight by now. InfiCure Bio have just recently been featured in both local and national media due to a decent size Vinnova grant in order to strengthen their main product – a unique mouse model of fibrosis. This same day she had been invited to the board meeting of Connect Norr – a national organisation connecting venture capitalists and startups in order to find the right match.

Following the new year celebrations, Inficure Bio delivered the first trial results to their international customer from the US. They are one of the companies in the world that are trying to find a compound that can stop fibrosis – or scar tissue formation in organs. Despite the fact that 40 percent of all deaths in the western world are directly, or indirectly caused by fibrosis – there is not one single substance that can cure or even halt this devastating symtom of chronic inflammation in the body.

InfiCure Bio is aiming at solving this status-quo by offering high tech service that consist of tailor-made clinical studies in the patented mouse model of the company. This could mean faster and more cost efficient development of new anti-fibrosis drugs.

Around three p.m. an email pops up at our office. The unbelievable eclipse of all good things on the 30th of March was complete. Sofia Mayans attached to photos of her holding the Diploma awarded by Connect Norr – for the ConnectCompany of the year in 2016 in Västerbotten. With this nomination, Inficure Bio is ready to join the national challenge where the main prize is a registration for the investment forum Connect2Ca pital 2018 in Gothenburg.
Västerbotten-Kuriren’s article about the Awards (in Swedish): http://affarsliv24.vk.se/1970115/tva-umeaforetag-prisades-vid-stamma
Connects own article on the nominations (in Swedish): http://www.connectnorr.se/ under Nyheter.