A long term and structured approach in combination with clear results. This is the motivation from the jury when Umeå municipality awarded Umeå Biotech Incubator the Equal Opportunities Prize for 2016. In parallell Vinnova published their most recent edition where the incubator’s CEO is one of the featured articles, and the work on equal opportunities is discussed in detail.

On the morning of the 8th of December 2016 representatives from Umeå Biotech Incubator were invited downtown to the offices of the equality committee at Umeå municipality. Jennie Ekbeck, CEO at the incubator presented examples of the long-term work on equal opportunities that has been a natural part of the incubator’s operations for years. Sofia Mayans, CEO of the resident company InfiCure Bio, gave a customer’s view of how UBI has been instrumental in her professional position in life sciences today.

Previous years the annual Equal Opportunites Prize has been awarded large companies like Polarbröd, Norrmejerier and Fältcom. In total around 25 companies in the region have been nominated.

In contrast, this year’s prize-winner is a small business incubator working with ideas and startups in the fields of pharmacology, diagnostics and medical technology. The incubator started back in 2004 – as a project within Umeå University – but was permanented in 2008. Today it is one of Sweden’s leading incubators and rated as “excellent” by the national innovation agency Vinnova.

Quality and competence are main considerations

Every year the incubator staff evaluate around 25-30 life science ideas, but only those who qualify get accepted. Personal meetings, a friendly athmosphere and inclusive, transparent processes are a few factors mentioned by incubator residents as positive and inspiring about their workplace.

Together with consious communications and clear goals, the amount of companies and projects led by female entreprenours have reached 38 percent. The goal is set on a minimum of 40 percent.

– The knowledge and competence available in Umeå has great potential to become the next big medical innovation. That is why we are adamant in promoting every individual that brings us a qualitative idea, no matter who the inventor is, says Jennie Ekbeck, CEO at Umeå Biotech Incubator.

On the same day that the equality award was presented, Jennie Ekbeck was featured in the national innovation agency Vinnova’s national magazine. It is a long profile article discussing several aspects of the strategy on equal opportunities that Jennie has been implementing since her start at UBI in 2012.

Read the full feature article i Vinnova Innovation (in Swedish). 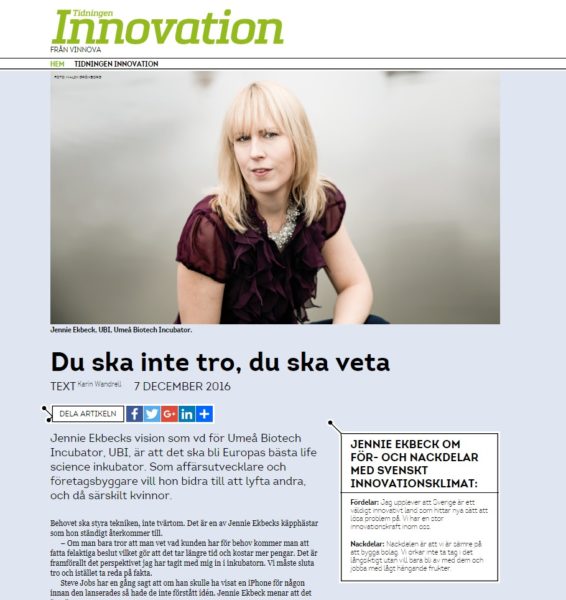 Bottom: Screen shot of the first section of the profile article in Vinnova’s magazine “Innovation”. Photo in the article by Malin Grönborg.