Despite a packed schedule of a startup on the rise – CEO Sofia Mayans chose to apply for a spot in this years edition of “Entrepreneur of the future”. Hand-picked as one of four directly to the finals, she has only one advice to other startups; “It is definitely worth it, and besides – it’s a lot of fun”.

Anyone ever involved in a startup knows the feeling. The constant pressure. Endless to-do-lists growing in your head. This is often the mental reality of entrepreneurs – but also a symptom of true dedication and motivation to realise an idea.
In this context, one would think that a CEO would not have time to take part in entertainment activities like a public pitch contest. But the invested time can really pay off. The value of accumulated publicity, crucial business contacts and the boost in competence can well surpass the cost of working hours spent on the event.

Second year with UBI-case in the finals

In 2015 Quretech Bio AB snatched a second in the equivalent finale. Then they went on to win the pitch contest at the much larger Bio Europe Spring and got showcased in a large variety of channels; newspapers, business media and even a globally distributed newsletter by one of the leading pharmaceutical companies.

This fall, another life science startup from Umeå made it to the top four. But once the votes were cast the winner turned out to be Karma AB, a company that reduces food waste from restaurants. Sofia Mayans is still very happy with the outcome.
– We received much more exposure and publicity than we could ever have created ourselves, and in addition I got really good networking tips and made new connections with the other competitors, she says.

Sofia Mayans is the CEO of InfiCure Bio AB who offers advanced drug validation services to pharma clients developing drugs against fibrosis. Fibrosis is the medical term for scar tissue formation, and is often due to prolonged inflammation in many human organs.

Inficure’s business idea resonated well with the jury – resulting in one of four fast-track spots in the live pitch finals which took place in Stockholm on the 24th of November 2016.

– Of course I was nervous, but the excellent coaching we received from Steinar Hoel Korsmo and the others at Seed Forum really helped, says Sofia Mayans.

A recurring advice to all candidates was to add more energy, and never, ever turn away from the audience to look at your slides. Sofia says the feedback was very valuable and the positive encouragement of being pre-selected gave her and the Inficure-team additional energy.

Sofia says has already noticed the increased attention around the company. As a bonus, they will soon be featured in a full-page ad in the magazine “Insikt” – published by Carnegie Investment Bank. Will this ad will find them the investor they are looking for? Only time can tell. 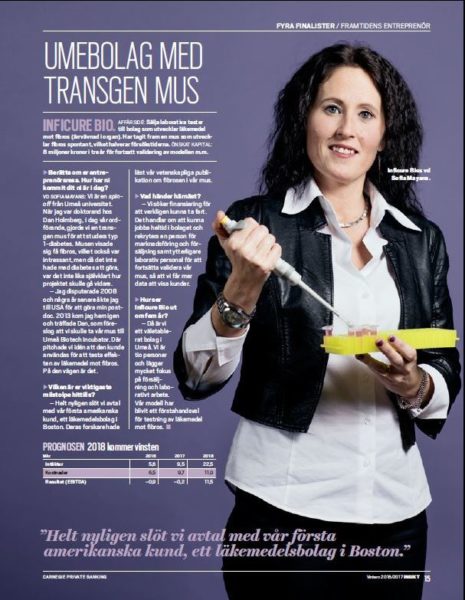