Despite the name, the Biotech Umeå Investment Day is not only about raising money and not only strict biotech anymore. This year’s event had a fair representation of innovations from ICT, digital health and chemical. And it seems that the investors are also widening their scope and contributing with more value than just capital to upcoming startups.

At Biotech Umeå Investment Day, the small format and friendly atmosphere allows for unexpected meetings, ad-hoc pitching and easy follow-up with interesting stake-holders. The context facilitates constructive feed-back from investors and makes the event a good verification exercise for developing companies looking to polish up on their offer.
But, up until recently, the “biotech” label has been a rather tight costume for the event. This seem to have changed this feburary 2nd.

Fritiof Pontén, CEO of Quretech Bio in discussion at one of the breaks during the partnering sessions.

Jonas Sjöstedt from Photonsports are one of the startups that could be seen as outside the mold. They are developing a new form of 3D-camera monitoring for athletic performance.

– My business idea, as presented, was probably the one that was furthest away from the others. However, we do have interesting possible applications of our core technology that are more clearly biotech, Jonas Sjöstedt explains.

During the investment day he was positively surprised and say that they received more attention than what we had expected.

– We might not have found a perfect match but we got some useful tips and got in contain with a couple of investors that we will keep informed about our future plans and advances, he says.

Dicom Port is another participant with a tech-heavy innovation. The company works with user-friendly and intelligent data management sources from health care equipment. When asked about the investor interest the experience was similar.

– The interest from was much higher than last year, concludes Dicom Port founder Jan Axelsson.

The CEO of Lunalec AB, Patric Stafshede, says that his case absolutely fits under the biotech-label but did feel a hint of the older expectations among some investors.

– Several found the technology interesting, but not within their scope. I get the feeling that many investors are expecting a narrower pharma-focused supply of companies, he said. 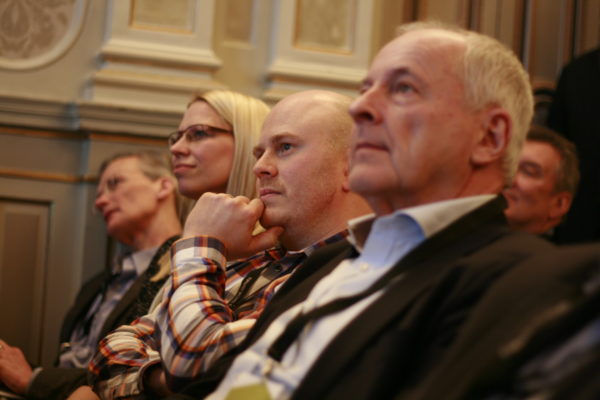 Annika Rönnbäck from Umeå Biotech Incubator and Emil Byström from Spinchem during one of the pitch presentations.

A neglected area of focus within pharma industry

Spinchems representatives had a busy partnering schedule in Stockholm. Both Emil Byström and Anthony Rees concluded that this year’s investment day had exceeded their expectations.

– We’ve attended before, and experienced that we did not quite fit in – as many of the investors had a strict pharma or biological focus, but this time around its’s different, says Emil Byström, CEO at Spinchem. His collegue fills in:
– We’ve had a lot of good meetings and we’ve been surprised by the actors we did not expect to approach us, adds Anthony Rees, chairman of the board of Spinchem.

Markus Goebel from Switzerland, representing Novartis Ventures, was one of those unexpected actors who emphasized the need for the industry to look beyond the end product and also get involved in developing the area of CMC – chemical, manufacturing and control.

– I think this is a neglected area for pharma industry. Even though you have a great candidate drug, there is an intense amount of work establishing production, getting the right contracts in place and making the process safe and cost effective. That’s why I’m interested in Spinchem for example, he says.

Overall, the number of participating investors have grown steadily over the years, with many coming back to Stockholm again and again. Markus Goebel, who finds the small sized events more valuable concludes that the event could grow – but not too much.

– At most you could double the number of participants – but not more than that, otherwise the atmosphere would be lost, he says.