The eight consecutive Biotech Umeå Investment Day attracted almost 30 Swedish and international investors to Blasierummet at Grand Hotel on the 2 of February 2017 in Stockholm. One of the most appreciated aspects of the event was the flexibility to arrange additional ad-hoc partnering meetings and the size and atmosphere at the event.

– I am positively surprised with the flexibility of the partnering. Despite my initial schedule being a bit disappointing I was quickly assisted to that I could meet with all the cases I was interested in, says Eva Filmström from Cadila Pharmaceuticals.
Representatives from the investor Seredipidy were also happy with the format of the event, among other things.

– The high quality of the cases involved is important to us. The companies may be in different phases, but that fits our interests very well, says Amin Omrani.

– We would even want to schedule talks with the early pipeline projects what we saw in the live pitches – but now we did get the chance to talk to them anyway, he says.

“We’re both rather impressed”

His collegue, Julia Fransson joins the conversation and fills in:
– We’re both rather impressed. The cases have all talked to customers at an early stage and seem to know their markets. They appear to be well coached, she adds with a smile.

– Another plus is the size, here everyone actually has the time to talk to each other, take a break, think it over and then talk again – that does not happen at a large international partnering event like BioEurope, Julia Fransson says. 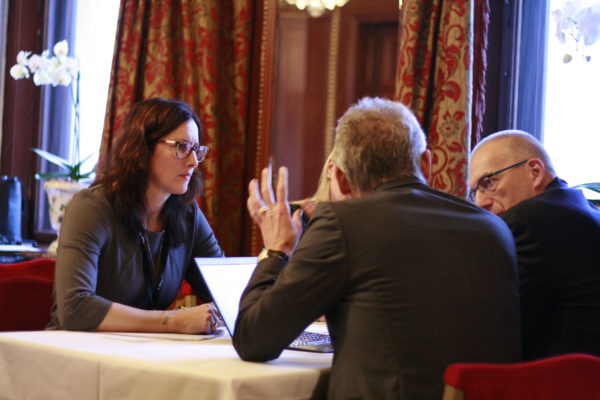 Helen Fält, one of the Business Coaches at UBI in talks with Novartis Ventures about one of the business cases.

Partnering companies happy with the outcome

The partnering cases and companies on site had a similar experience.

– This is probably the best lineup of investors that I’ve seen so far, said Stefan K. Nilsson, CEO of Lipigon Pharmaceuticals, one of the fifteen participating startups.

Several other testimonials from partnering cases mentioned the great value of the feedback received during the sessions.

– We were interrogated quite thoroughly, but not in a bad way – but with a genuine curiosity. That gives us something to bring back home and work on, no matter the direct outcome of the meetings, says Lina Olsson, CEO of Hiloprobe.

As the day came to a close – the general feeling was inspired but tired. A sound sign of a valuable day full of new contacts and opportunities.